British Columbia pottery of the mid-late 20th century displays distinct themes of the West Coast natural world, of West Coast Native spiritual and cultural designs, of the great Pacific Ocean. It is glorious in colour, organic in shapes, and grounded in land and sea. The following potteries are a few of B.C.s better-known pottery manufacturers, with a studio pottery or two thrown in. These pages are by no means complete, but I have tried to pull together here what is known about BC pottery and the research resources where more in-depth info can be found: 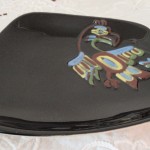