Cranberry Pottery of Powell River, BC closed its doors on April 12, 2014. The pottery was in production for 40 years at which time the owners made the decision to retire. The company produced handcrafted porcelain-like stoneware pottery; they were known for their functional production pottery in five main patterns. They produced full lines of hand decorated dinnerware, accessories, teapots, serving dishes and ovenproof bakeware. As well, special designs evolved over the years, such as Crocus,Tulip, Sunflower, Bouquet, and Thistle patterns. In past years the shop showcased special projects and interpretive work by particular artists, such as unique patterns, and functional, but unusual, pottery pieces.

“Almost all the pottery pieces were done by an individual potter, with their personal stamp in addition to the Cranberry Pottery stamp on the bottom of pots. In about 1990 dates were added to the bottom of pots, e.g., 91 for 1991, and 00 for 2000.  The glazing, however, was a group effort and all potters were encouraged to develop the necessary skills.  Over the years new designs were developed, and old ones dropped as tastes and materials changed, and the clay body eventually morphed to almost white stoneware.  All surface decoration was hand painted and all designs were unique to Cranberry Pottery.  However it should be noted that almost all employees were trained to be full-fledged potters, not just skilled in one area. Everyone made pots, glazed, shared in kiln loading both bisque and the fuel fired Cone 10 car kilns, and worked in the sales area as well.

For a variety of reasons, various production methods were used, not just throwing on the potter’s wheel.  Castware was initiated because a non-porous porcelain clay was required for vases; extruded pieces were needed for hand built rectangular casseroles; jiggered ware made for matching dinnerware, and was much easier on aging bodies.  All molds and all designs were produced in house.” (Carol Bieber)

Five main patterns were produced with over 100 items in stock of these patterns: 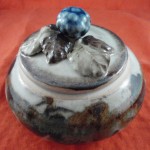 Below are a few of the special patterns available as limited stock or by order: 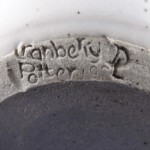 Carol Bieber, co-owner and potter, has provided more in depth information on the history of the pottery, potters, and patterns. Check it out… 2014 Cranberry Pottery History (by Carol Bieber)

For a limited time only, the Cranberry Pottery website has information and the latest catalogue available – this has been the main source of my information.